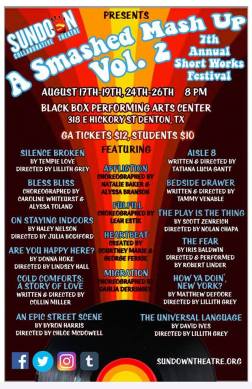 Sundown Collaborative Theatre’s A SMASHED MASH UP features a variety of short acts ranging from the scripted and linear to the devised and abstract. This year’s festival dives into the chaos of contemporary life and explores how we react when forced to confront unexpected and unpredictable situations and people.

Each night of performances will feature a different line-up of acts. 6 nights, 16 works, 1 festival!

This piece explores conflict, heartbreak and vulnerability felt by persons and the interaction of dancers in unison, solo and in direct affliction.

A grocery store clerk named Joe struggles with how to deal with a strange woman named Emilia he finds sobbing in the canned vegetable aisle. After Emilia reveals that her husband has left her, she and Joe discover they are connected in a way they never expected.

Hans lies in mortal peril after a bad wreck. Wilhelm needs to tell Bertolt of this horrifying event. But Bertolt only wants to hear it one way, his way!

Are you Happy Here?

In this analogous tale, Paolo has everything he needs to be happy in his contained existence–so why isn’t he?

Two children, Jack and Jill, steal some bubbles from their mother’s drawer. Hilarity ensues when Mother misunderstands and thinks they have stolen a different kind of toy from her.

This quirky piece explores the relationship between two dancers using spatial patterning. Through the playful use of carving and slashing, the movement allows for unison while varying in proximity.

An interactive improve piece mixed with hints of choreography that stem from sign language. Fulfill is a tribute to the late Dr. Linda Caldwell- author, dancer and faculty of TWU dance. She passed away this semester after a long batter with cancer.

Through poetry, performance, and dance unfolds a story of self vs. self, the strangeness and danger of one’s own mind, and the inevitable beauty of life and death. This piece was written for every person who has ever stood on the edge of a cliff wondering if they should jump.

How Ya doing New York?

The guest appears on popular talk show “How Ya’ Doin’, New York?” To promote her music. Having never seen the show before, the guest is unprepared for the host’s zany attitude, pop quizzes, and interrogating of her political beliefs.

A fan dance that showcases the Classic burlesque style.

In an empty world of dust storms and an inexplicability burning orange sky, a husband and wife reminisce and speculate about when the end will come.

A solitary morning bath is usually relaxing. But sometimes it starts to feel like you aren’t so alone. Then comes…THE FEAR!

Prince Hamlet hopes to prove his uncle Claudius guilty of his father the king’s murder, but his designs are frustrated by THE PLAYERS and their company mission to produce plays as holistic pieces of art that evolve from a collaborative process.

This piece brings together Dawn, a young woman with a stutter, and Don, the creator and teacher of Unamunda, a wild comic language. Their lesson sends them off into a dazzling display of hysterical verbal pyrotechnics—and, of course, true love. 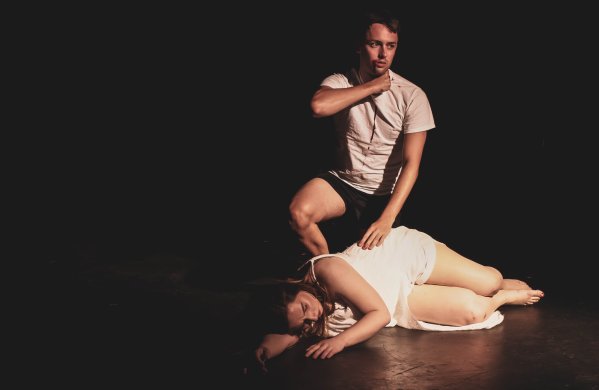 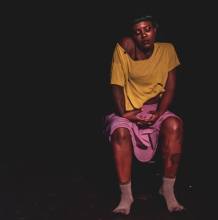 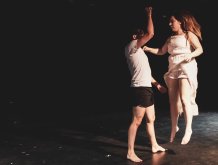 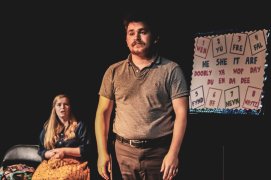 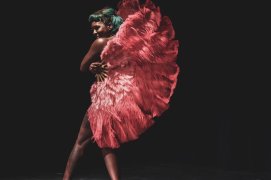 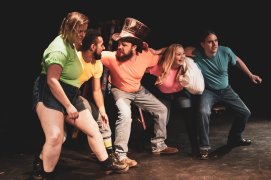 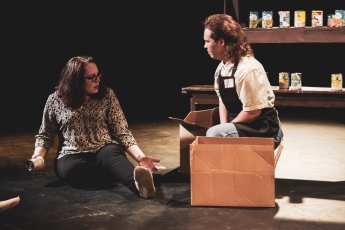 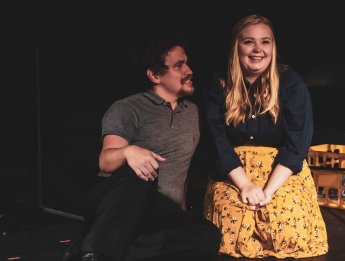 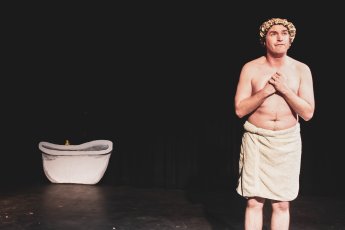 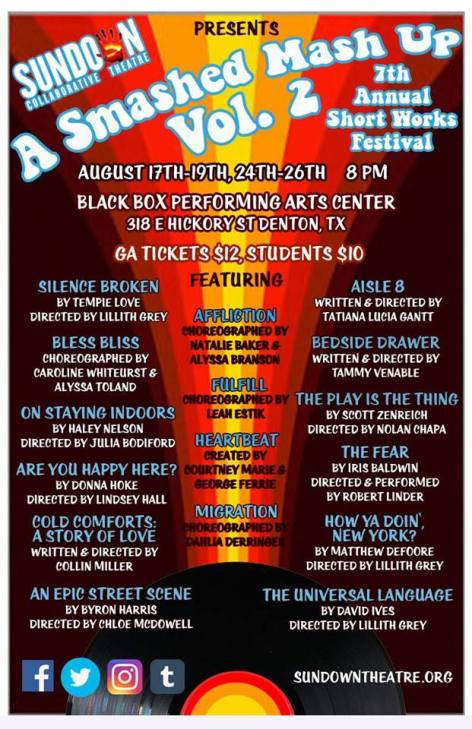 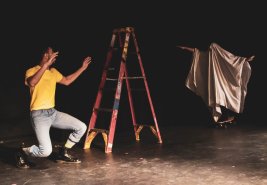 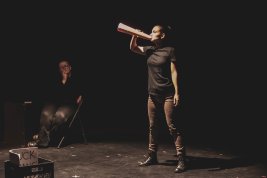 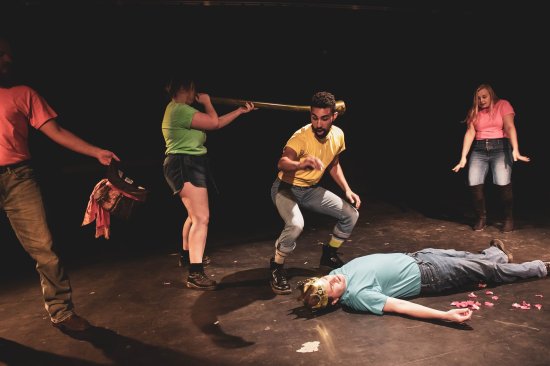 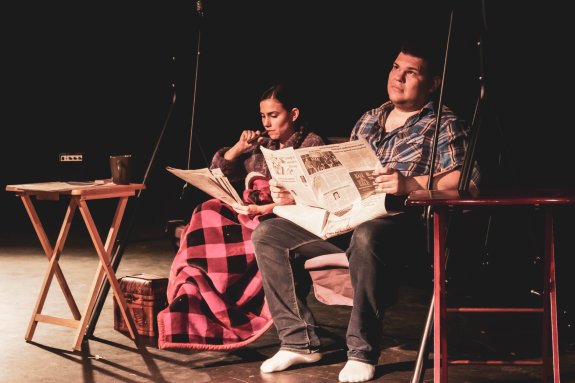 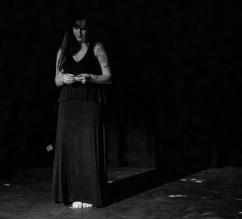 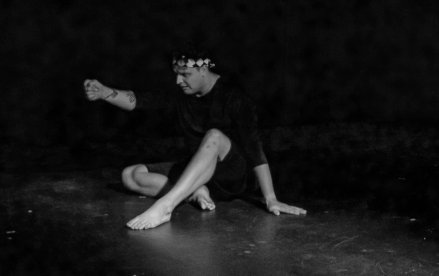 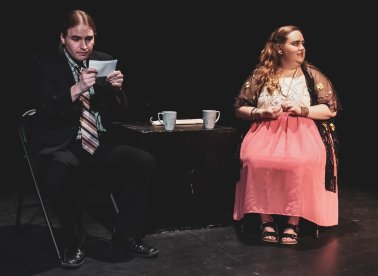 How Ya Doin New York 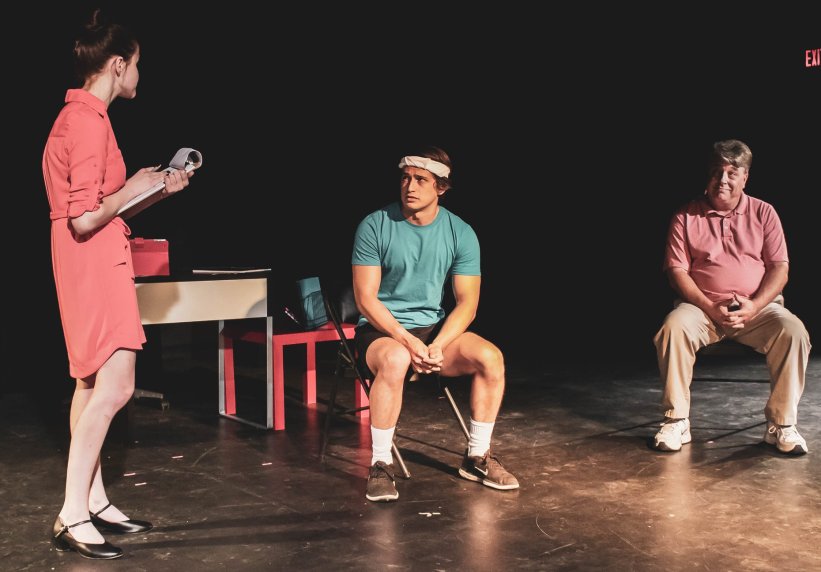 Are You Happy Here?